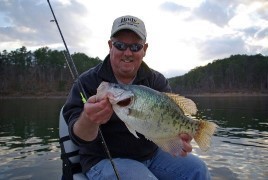 I'm told I got my first fishing pole when I was two days old.  It's a family tradition.  I remember catching my first big fish that destroyed my little Zebco 202 and graduating to the 808.  Growing up in West Texas, my family cat fished the waters of eastern New Mexico's Pecos and Canadian rivers.  While in the Marine Corps I bass fished Virginia and North Carolina and was blessed to fish the beautifully clear saltwater around Diego Garcia (British Indian Ocean Territory).  In 1991, after graduating Texas Tech University, I moved to Arkansas and knew I found the best fishing waters in the world.  In February 2003, I started fishing lakes Hamilton and Greeson.  By March 2005, I started guiding full-time.

I received my Coast Guard approved Captain's credentials for all U.S. inland waters December 8, 2010. (please note: inland waters includes all freshwater lakes and rivers plus vast amounts of saltwater from the international demarcation lines shoreward and the Intercoastal Waterway.) Perhaps one day I will expand my business to include some coastal fishing during the winter months.

How did I get the nickname Big Daddy. Well, most would think ironically that it's because I am a man that is, let's say, vertically challenged. No, it's not that simple. In the Marine Corps the smallest recruit in a platoon during boot camp is traditionally called "mouse". He is the "house mouse", the one who is tasked with cleaning the drill instructor's duty hut, etc. That nickname always sticks to a Marine who is small in stature. It did for me until I picked up Sgt. That is when I graduated to "big daddy". New privates would come to the platoon asking about the Platoon Sgt. My troops would tell them, "he is a good Sgt. but don't piss him off." I loved my men and my men loved me. Nothing but the best no matter what. It was tough being that young with so many even younger than you. It taught me much about how to love sacrificially, about honor and loyalty, about fishing, having a great time and expecting the best every day.

Since then I have been published in:

The Arkansas Democrat Gazette and other newspaper publications throughout Arkansas

and host the original Crappie Camps twice per year since 2006.

However, a man is not made by what he tells, but rather by what he does and especially how he does it.  I live for the days we get to make some new friends and take them fishing.

DON'T LET THE NAME OF MY GUIDE SERVICE FOOL YOU. IT'S NOT JUST FOR FAMILIES.

THE ACTION IS HOT AND THE WAY I FISH, THE MOST EXPERIENCED GROUP OF MEN TO THE MOST NOVICE OF FAMILIES WITH SMALL CHILDREN CAN DO IT..

but I have been guiding my "family" on fishing trips since 1988.

My thoughts about being a guide

A guide has a desire to help others fish successfully.  My philosophy is not that of an "ex-pert" but rather that of taking some friends fishing.  It is difficult to catch fish consistently unless you fish often and become familiar with their seasonal migration and feeding patterns.  I fish as often as possible in every season to follow these patterns and put you on fish.

A guide is a mentor.  Much the knowledge I possess about crappie fishing was learned from others.  I will share valuable fishing information and techniques that will make you a more successful angler. Then you will be able to step out on your own as I did, personally improve upon what you've learned and succeed.

A guide is a good entertainment investment.  I will do everything in my power to provide a memorable fishing trip.  Maintaining your own boat and tackle can be expensive, especially when you're only able to hit the water a few times a year.  Fishing with a guide these few times a year costs far less and reaps greater results.

A guide practices what he preaches.  Guess what I do when I go on vacation?  I go fishing and hire a guide.  A guide, even if you're an experienced angler, helps you gain valuable and useful information on a fishing trip.